Good lord, what an almighty faff this has been!  Making a Battenberg cake didn’t sound that hard, I admit, and it hasn’t exactly been terrifying, but a thoroughly frustrating business that has revealed all manner of holes in my housekeeping skills!

I meant to do it a week ago.  Didn’t have the ingredients so made a list of what I needed.  Next day went to the shops, but forgot the list.  The day after: finally managed to buy the ingredients.  Great, I thought, I will bake it tomorrow.  But the weekend came and went, with alas no spare 3 hours to attempt Battenberg.  By the 6th day, I was determined.   Looked again at the recipe.  Oh bugger.  I don’t have the right sized cake tin.  Oof.   Never mind.  Borrowed one from a friend.  Started assembling ingredients.  But hold on – I don’t have enough eggs!  How can that be??  I checked all the ingredients only last Thursday…. Oh.  We ate the eggs for tea last night.  Bugger again.  Assembled everything but the eggs; eggs to follow…

Finally, got eggs, got tin, got everything – and spent a peaceful couple of hours in my kitchen, radio on, baking and assembling, nibbling the offcuts, sticking all the bits together – et voila! 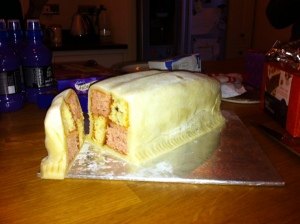 I took it along to a play date, to the astonishment of friends who are more accustomed to me turning up with a packet of Happy Shopper digestives (at best!)

All in all I am quite pleased with that one.  Which is lucky as I could be eating it for weeks, since no one else in my house will touch it.  Grrr.

Woo hoo!   This was brilliant!

The floods have left all the paths and bridleways round the Cotswold water parks looking somewhat inhospitable to cyclists.  In many places it’s hard to tell where the path ever was; whole fields are underwater.  But, ideal for an adventure.  Some stretches were only under a foot of water, and the bike managed that fine… others went deeper, but the excitement factor is in not knowing when you go in whether you’ll emerge the other side!  The last one was beyond my bike skills and became a very cold wade through knee deep water.

Bracing, but it made for the sort of morning when I am quite happy not to have a job! 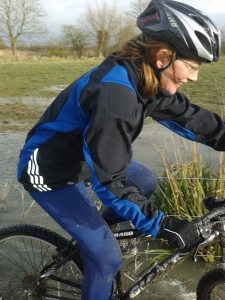 OK, my first real challenge!  Over breakfast I told the children they were now in charge, of everything, for the day.  I wasn’t going to nag; it was up to them to plan our activities, and get us all organised, before and after school.

I was fascinated to see how they each responded to their leadership challenge.  The three of them are so different.

One became the very image of me in the mornings, and frankly it wasn’t pretty.  Every few minutes she would check the clock, and bellow out the time in increasingly urgent tones.   She organised everyone’s clothes.  She put toothpaste on all the brushes, and called the others to brush.  They ignored her, so she took the brushes to the people. The people continued drawing.  She started on the threats.   ‘If you do not brush, you will have stinky breath at school.’  No response.  ‘If you do not brush then I will not play with you.  Ever.  Again.’  On they drew.  She moved on to brandishing a hairbrush.   By 8.30 she was cross, and everyone’s personal presentation left much to be desired.  The whole scene is sadly familiar, though to her credit there was rather less aggression than usual.

The second flailed around, befuddled by her freedom.  ‘I don’t know what to dooooo, mummy’, she wailed, seemingly stumped as to what came next, after pants and a t shirt.  She stomped from room to room, untroubled by her chocolate spread face mask; searching for the cardigan which she had, herself, just put in the tumble dryer.  (The real mummy had to step in, at a late stage.)

The third took full advantage of the situation, and by 8.25 had drawn a splendid unicorn, complete with 6 baby unicorns, each one named and carefully labelled after a member of our extended family.  I hadn’t heard a peep from her, yet interestingly, she was also dressed, passably clean, breakfasted, and ready to leave on time, her homework in her bag.  Our 4 year old has learnt a great deal through the parenting strategy of neglect.  I recommend it highly.

After school came a trip to the swimming pool (our third in as many days), followed by a whole chocolate bar each – BEFORE tea.  We shopped for their dinner ingredients (chicken nuggets AND fish fingers, pasta and cheese, green beans).  I was instructed to prepare it while they watched a LONG film, and dinner was served in the lounge, still watching.   Yet all were in bed by 7.30, their wildest ambitions fulfilled, and I am left congratulating myself on a fun day with quality time and minimal stress.  And totally loving their innocence – I fear the future may hold greater rebellions than eating a Crunchie before tea!

I have set myself a challenge: for 100 days I will do something every day that pushes me out of my comfort zone… hopefully completing the full 100 before I turn 40.

I have consulted friends far and wide, resulting in the following list of challenges.  It is a work in progress so I reserve the right to change them as the attempt goes on…   New suggestions or challenges are always very welcome!

I’ll aim to blog about each as I go; post some photos; and, if my technical abilities permit, I will include the facility for folk to comment and tell me what you want more of.   But for now, here’s the list:

100 – Take a photo of each achievement & publish them in a book!

Some slots are still blank – please do send me your suggestions!